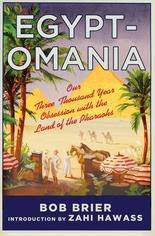 
Here we have Dr. Bob Brier's latest work "Egypt-Omania" of which I expect a good read from his past works, also it is a good sign when the eminent Egyptologist Dr. Zahi Hawass gives the introduction. Dr. Brier bears the moniker Mr. Mummy because of his specialty being, examination of mummy's, and of the last time I saw these two men working together Dr. Hawass had given Dr. Brier an opportunity to examine the royal mummy, Unknown man E, in the Cairo royal mummy collection.


The introduction by Dr. Hawass is a rundown of his career with some insight of the colorful people that he has met that had clearly caught Egyptomania fever, from paper pyramid hats to people who believe just about anything said of old mystical Egypt. The doctor says on the technologies of CT scans and DNA,


"We made a number of important discoveries through this new technology. Among other things, we identified what is most likely the mummy of Queen Hatshepsut and discovered that Ramesses III was murdered in a harem conspiracy."


As the book begins we find Dr. Brier and his wife Pat are driven by their desire to collect just about everything Egyptian with a love for ephemera such as old magazine covers, ads and even candy mummies for the kids on Halloween. We are told of some exceptional finds in the doctor and his wife's collection including a once in a lifetime acquisition of a tragic noble woman's archives which include letters received from the leading archaeologists of her day.


The author takes the reader to the birth of Egyptomania with the Greek's and the Roman's, from the last of the Ptolemaic Kings, Cleopatra VII's story of seduction, suicide, and the former world power is reduced to provincialism under Rome. Certainly, the Goddess Isis was the last sentinel of Pharaonic Egypt before the long silence that followed.


Dr. Brier is next on the Roman Emperor Hadrian's tour up the Nile where his lover Antonius drowned and Hadrian founded the city of Antinopolis in his name, which unfortunately its ruins were burnt in the early 19th century for lime plaster. The sixteen hundred-year-old silence comes to an end by one the biggest egos of the late 18th, early 19th century, Napoleon.


Though the victories were short-lived, it is the efforts of his scholars, brought along, in many scientific fields that produced the magnificent volumes known as "La Description d' l Egypte". The author presents the reader with the political power of Egyptian obelisks as diplomatic gifts with a plan to bring not one obelisk to France but three.


We are presented with eight pages of colored pictures which are a lot of Egyptian inspired designs in objects and advertisements particularly of cigarettes of the last two centuries. France was eventually given one obelisk, one of two that stood at Luxor and transported to Paris in the early 1830's to be placed on a new pedestal in the Place de la Concorde.


With this great engineering feat accomplished and standing, there were now calls for England to have its own obelisk which was laying on the ground at Alexandria. The obelisk having been given to England long before but never picked up, this being partly owing to a famous English Egyptologist living in Luxor at the time the French took away their obelisk.


"from the mutilated state and the obliteration of many of the hieroglyphs by exposure to the sea air, it is unworthy [of ] the expense of removal."


Fortunately, when the sand was cleared from the obelisk it was found to be in better condition than assumed bringing on another amazing engineering task getting the stone to the Thames which in the end cost the lives a six brave men.


The publicity caused by the raising of the Egyptian obelisks in Paris and London set off a fascination with ancient Egypt, and ancient Egypt a dream for marketers. The previous colored pages of advertising and design objects are defined by their inspiration even when the viewer is presented with images anything but Egyptian.


Dr. Brier now takes on New York's obelisk with more brilliant works of engineering and a find beneath this obelisks pedestal of objects of purported Masonic origins. This discovery takes on extreme significance with New York's Freemason's who gather in grand numbers for the delivery and re-erection of the obelisk and its pedestal in Central park.


Again we have another small section of colored pages including more smoking memorabilia, amulets and song sheets, all with Egyptian themes. The reader is next on to the public fascination with mummies and the find of the mummies of Egypt's greatest pharaohs.


Dr. Brier recalls the story of the discovery of tomb DB320 where a cache of kings, queens, and nobles lay hidden for 3000 years, bringing everyone the ability to look upon the faces of some of the greatest pharaohs from the period of empire. Yet an even bigger event influenced the marketing of products and fashion, the discovery of Tutankhamun's tomb in November 1922.


The author brings in a number of contemporary song sheets bearing Egyptian themes including "Old King Tut was a wise old nut" presented before Tutankhamun's mummy revealed a teenage boy. From old song sheets, the author moves on to ancient Egypt's influence in books and movies with a fascinating detail, that at one time the mummy of Imhotep was originally modeled after the questionable mummy of King Seti II.


The author presents solid information in this publication with the book certainly being suitable for 10 years old and up. Dr. Brier's examination of ancient Egypt is brought to the readers through the contemporary cultural influence it has on the modern world, especially as the next great discovery or Hollywood sensation is likely to start the flame of passion in future generations and cast them under the spell of Egypt-Omania.


"This film first introduced tanna leaves, a fictional plant, to audiences. The high priest uses three of them to keep the mummy's heart beating and "nine to give him life."The distinction between a heart beating and life is beyond me."
Posted by Timothy Reid at 3:05:00 PM