Island of Isis: Philae, Temple of the Nile 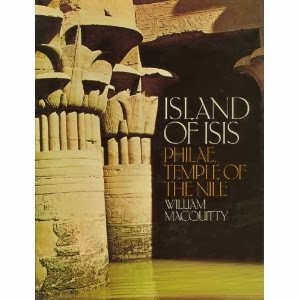 This light attractive book is filled with beautiful pictures taken by the author of many of the temples built along the Nile. The book's forward is written by the late Keeper of Egyptian Antiquities at the British Museum T. G. H. James.


Mr. James presents the current situation of the Philae temples as of 1976 when the Aswan high dam had submerged the temples and structures on the island for much of the year. The traveling exhibition of "The Treasures of  Tutankhamun" raised funds to help pay for the preservation, removal and to rebuild the structures on a nearby island on higher ground.


In chapter one, the author describes the geology of the North African landscape in prehistoric times, the retreat of the inland sea which covered Egypt with the eventual carving of the Nile valley. The sources of the river are explored including the descent into the valley by the ancient peoples and the effect these people and their legends would have on ancient Egypt.


A two-page map gives a very informative list of locations to the authors words. Mr. MacQuitty is next onto the building of the monuments, particularly of sandstone in Upper Egypt and a description of temples built on the Nile surviving mostly in Ptolemaic building works.


We are next onto the ancient religious beliefs which include the Osirian myth where Isis twice recovers her husband/brother Osiris' body. With this legend, the reputation of Isis builds over the centuries to being among the last of the ancient Egyptian gods to be worshiped in the Greco-Roman period.


The practice of mummification is presented in its evolution so that everyone can become an Osiris. The mastaba tomb is eventually overtaken by the building of pyramids which in time fail their purpose leading to burial in the Valley of kings opposite on the west bank of Thebes.


A fantastic image of mummified crocodiles in the temple of Sobek at Kom Ombo is presented though in black and white. The book is an easy read that an hour and a half later I am already halfway through, certainly, the book is suitable for ages 10 and up.


The relations with the gods and goddess' the Ptolemaic kings and queens emulated were reinforced in the building and decorating of temples, clearly, the Ptolemy's took propaganda very seriously. Propaganda which this book is filled with to the authors credit and this readers delight.


We next turn to perhaps histories most murderous dynasty beginning with Ptolemy IV who murdered his mother and perhaps his father too. Cleopatra's II & III also met with the same fate as did the mother of Ptolemy IX who murdered her on his return to the throne after the expulsion of Ptolemy X.


The elderly Berenice was murdered by Ptolemy XI who in turn was dragged through the streets and himself murdered followed in succession by Cleopatra's V, VI , Berenice IV, Arsinoe IV and Kings Ptolemy XIII & XIV all of whom met unnatural deaths. Giving new meaning to the phrases "Honey I'm home" and "how fast can I climb out the bathroom window".


In chapter four Mr. Macquitty presents the island of Philae complete with two maps showing the island and the temple of Isis. The wonderful pictures are of the islands half submerged monuments and one of the islands monuments after the water had been pumped out before the dismantling and removal to their new home.


Our guide describes the various scenes on the monuments and the various Ptolemaic kings and queens worshiping and presenting offerings to various gods including Isis in the decoration of the monuments including Roman emperors as well. Most notably perhaps in the kiosk of Trajan, "the Pharaoh's bed", often considered the most beautiful monument on the sacred island.


Chapter five presents us with the project in the late 1960's and early 70's to save not only Philae which by this time had spent many years flooded 9 months of the year but also the removal of the temples of Ramses II from the rise of the water at Abu Simbel. Amazingly the temples on Philae benefited from the water as the waters removed the salt from the sandstone blocks beside washing away much color unfortunately.


The pictures at this point are of operations during the dismantling of the temple of Ramses II and preparations being made on the island of Agilkia to redesign the islands atmosphere to resemble the sacred surroundings of the sunken island of Philae. A sheet-piled coffer dam was built around Philae to pump out the water and reveal this sacred land for the last time.


Perhaps a unique image I have found in the book is a black and white full page image of the Meroitic cemetery at Gebel Adda in its last moment before the surrounding lake drowned it, though the books images contain many unusual examples. The author next turns to the obelisk retrieved from Philae and now in England and its importance in the reading of the Egyptian hieroglyphs.


The book closes off with a short on the completion of the Abu Simbel-Project which in turn is followed by a chronological table and a listing of various ancient Egyptian gods. This is the second book I have read by William MacQuitty the other complementary edition being 'Abu Simbel".


Again as in the author's other work on the saving the temples from the flood waters of Lake Nassar, a journey has been taken to view and marvel at sacred environments of thousands of years, William MacQuitty grants the reader the last look at the Island of Isis.


"I; I listen; I promise myself that I will remember it all in years to come - all these solemn hills, these silent colonnades, these deep, quiet spaces of shadow, the sleeping palms. Lingering till it is all but dark, I at last bid them farewell, fearing lest I may behold them no more."