The Search for Alexander: An Exhibition 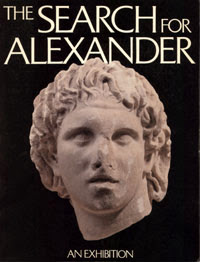 This publication accompanied an exhibition of objects on a United States tour, many on loan from Greece for the first time between November 16, 1980, and May 16, 1982.


The book opens with a forward by the Director of the National Gallery of Art J. Carter Brown, to thank the people involved in putting the exhibition together including the conception of the show.


The story opens with "Alexander and his Heritage" by Nicholas Yalouris in the 5th century B.C., among the Greek city-states before unification. The story of Alexander is probably at least in passing familiar to most people complete with admiring kings and a number of mythical creatures.


The development of Alexander's many representations throughout history particularly of works in relation to the advancement of the arts both political as well as artistic. The chapter is liberally accompanied by pictures of his legend and its manipulation.


In the second chapter, Katerina Rhomiopoulou writes on an outline of Macedonian history and its art as it evolves over time culminating with the supreme discoveries of the royal tombs at Vergina. We are presented at this point with a full-page map of the city-states of the Greek world which is very useful in the authors background on the unification of ancient Greece.


The empire was short lived as Alexander's generals carved it up with Ptolemy I taking control of Egypt at Alexander's death in 332 B.C. The body of Alexander is brought back to Memphis where Ptolemy takes control of it until the reign of Ptolemy IV when a mausoleum was built to house him and the Ptolemaic rulers. 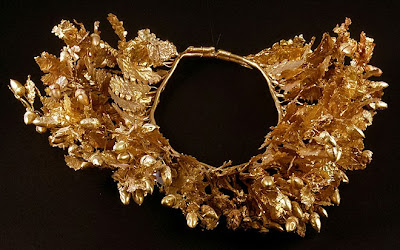 Next, we are presented with an account of the excavation of the royal tombs at Vergina by Manolis Andronikos. I was glued to my book by this chapter and could not put it down which included an image of the excavated tumulus and a cross section of tomb II and its marvelous finds within.

"When the sarcophagus in the antechamber was opened, we met yet with another surprise. A second chest, a little smaller and more simply decorated than the first, dazzled us with its glittering gold. We took it out, set it, for the moment, on a plank on which we stood, and opened it."

"A well-nigh incredible sight met our eyes: A marvelous gold and purple brocade shrouded the bones; the whole background was gold, with flowers, leaves. and stalks in purple, framed by a wave pattern in gold and purple."

The intact images of the in situ material are some of the best including on page 36 an image of the interior of the gold box and its stunning contents in the antechamber. We are next on to the color plates which include many portraits of Alexander and his family at least according to the Roman Emperor Caracalla.

The various color plates display objects of the plastic arts in both gold and stone and once again I see one of my favorite pieces of ancient goldwork in a spray of life size wheat leading the reader through a stunning array of gold jewelry. funerary goods with the most unusual find of a gorytus which may be of Scythian origin.

Next we are on to the catalogue section of the book with entries from General Editor Katerina Rhomiopoulou for the loans from Greece and General Editors Ariel Herrmann and Cornelius Vermeule for entries from Europe and United States. The catalogue contains a little more than 173 works in the exhibition included with most a small black and white picture of the artifacts as well as its references.

The exhibition opens with appropriate enough a marble head of Alexander the greats father Philip II from the Ny Carlsberg Glyptotek, Copenhagen. We are next on to a series of eight heads mostly marble but one of bronze which show Alexander as mortal and in a guise of Alexander-Herakles. 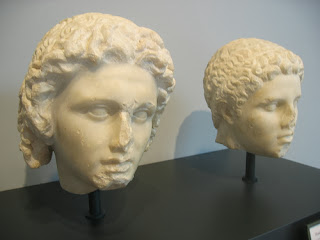 The catalog is certainly informative with many lovely things including a relief of Ptolemy I in front of Hathor. From here a whole series of portraits goes by in the round or on the nearly two dozen coins in the exhibition of which most were from Boston's Museum of Fine Arts.

Three bronze statuettes of Alexander are mixed in with a couple of very nice reliefs but the next really outstanding piece is from the Metropolitan Museum of Art, New York, being a slightly larger statuette than the previous mentioned and certainly far more interesting in character as the horse rider minus the horse abounds with life and movement dressed in an elephant's skin. 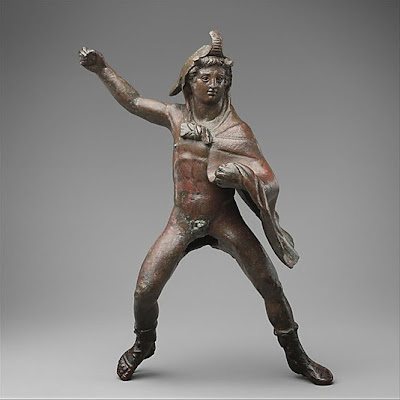 This figure is quickly followed by a marble grave stele of a mother and child found at Makriyalos in 1970. The delicate relief has the seated mother looking forlorn while the child falls back into her arms which are lovingly in a loose embrace of the child.


From this point, the relics are far more interesting in appeal including a magnificent silver rhyton from the George Ortize collection. The silver rhyton is in the shape of a deer's head with its ears perked and horns gilded along with a small frieze around its neck of six warriors in a confrontation.


Black and white images rarely do justice to art and this is true with its images of the many pieces of jewelry in this long past exhibition. This is made more confusing in that the many terms used to describe the techniques used in making the pieces of jewelry are not familiar words that would be used by the average person including myself.


In the end images in black and white or color cannot do justice to this landmark exhibition but certainly, this catalog is a fantastic piece of reference material I will use in the future. The lives of Philip II and Alexander the great has left an amazing impact on our world which is wonderfully explored in the exhibition and catalog "The Search for Alexander". 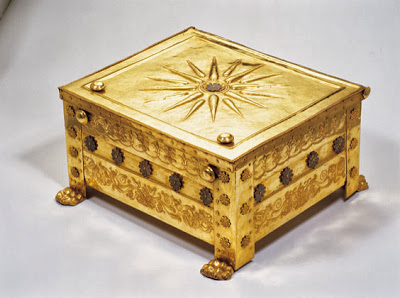 Notes:
Images; Objects pictured were in the exhibition

Bronze of Alexander(?) in elephant skin; Metropolitan Museum of Art