The Unrolling of the Mummy of Nebset 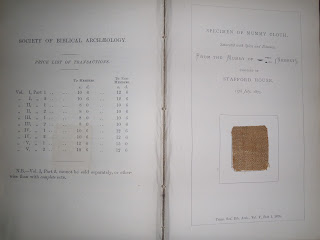 I recently had the privilege to come across this rare book, Transactions of the Society of Biblical Archaeology 1877, that contained a piece of mummy cloth from the unrolling of the mummy of Nebset on July 15, 1875. The mummy from ancient Egypt's 22nd dynasty was reported to have been found at Sheikh Abd el-Qurna and acquired by the British Consul-General in Egypt General Stanton and gifted to the Duke of Sutherland. The mummy was unrolled at Stafford House in the presence of the Duke, Lord Dufferin, Sir H. Cole, and a select party of guests. The mummy was unrolled by British Museum Curator of the Egyptian department Samuel Birch. The corpse was contained within a cartonnage envelope in the form of a mummy with crude paintings of the regular funerary genii upon it.

Of this event Mr. Birch says:

"The body was with some difficulty extracted from the cartonage, and found to be swathed in bandages of rather a dark colour, and by no means so full and numerous as is usual in the later class of mummies, although packed with some care. No inscription occurred on them, nor was any amulet or other object found to give a clue to the embalmed person, the only object discovered being some white leather placed about the back of the head, either a hypocephalus or else a skull cap, naams, but it was too far gone to determine its character and use. The body was very thin, the skin was brittle, the hands crossed over the pubes, giving the usual arrangement of a female also; a later examination of the skeleton has led to the conclusion that it was the mummy of an old man."1

The cartonnage was acquired by The British Museum (EA 75194) though I was unable to find a picture of it online, and the mummy was sent off to The Royal College of Surgeons. During World War II the earthly remains of Nebset along with much of the college's collection was destroyed by bombs dropped during the blitz of London.