Ramses II and His Time 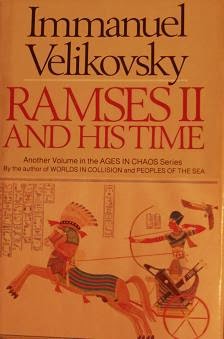 Here we have another edition of Immanuel Velikovsky's 'Ages of Chaos' series. The series was very entertaining and controversial and still is. In the introduction, the author lays forth the breadth of this book in which he will attempt to identify three Dynasty XIX pharaohs including Ramses II with pharaohs of Dynasty XXVI.


The book opens with the famous battle of Kadesh which Ramses II claimed in a number of temples he had been glorious in victory when the reality was the world's oldest known peace treaty saved the day. The location of ancient Kadesh could be any number of sites along the Orontes or Euphrates rivers. The authors theory is that King Necho of Dynasty XXVI is, in fact, Ramses the great, though historically the two kings reigns are separated by 700 years.


From the start, I can see that this book will not appeal to a younger reader as it has few pictures and quotes passages from among other sources the Bible. Mr. Velikovsky's tale moves onto Ramses II and his battles with Nebuchadnezzar.


The authors theory is enormously complicated especially as the kings in the sources whether Egyptian, Babylonian, Hittite, Phrygian or any number of kingdoms occupying the Middle East and Mesopotamia histories have multiple names for each including five for the Egyptian king alone. The reader is presented, or burdened with documentary sources often fragmented and or telling what appear to be related events which have historically been dated hundreds of years apart. This includes removing the seven centuries that chronologically now exist between Ramses II in the thirteenth century BC and Nebuchadnezzar in the sixth century BC.


Every few dozen pages a couple pages of black and white pictures are presented usually representing reliefs, stelae, and related material which for the most add little to Mr. Velikovsky's points. The tomb of King Ahiram found at Byblos contained Hebrew inscriptions in Phoenician letters warning intruders at the bottom of the shaft to his tomb and on the lid of his sarcophagus against intrusion. The violated tomb also contained two damaged vases bearing cartouches with the names of Ramses II.


The archaeological descriptions while interesting have not lessened the confusion of the authors theory being put forward thus far.


'Then something happened of which they had not dreamed. Out of a steep slope facing a riverbed beneath the ancient ruins of Boghazkoi crept tablets inscribed with cuneiform signs.' 'In three weeks excavating with the help of the peasants and without taking  proper precautions, they hurriedly carried from the slope two thousand five hundred tablets and fragments.' 'The next year (1907) thousands more tablets and fragments were carried from the slope in Boghazkoi, raising the number to about ten thousand.'


The question of accession of the line of Babylonian kings presents again challenges as according to Mr. Velikovsky and his points Nebuchadnezzar rewrote his history eliminating in later documents the reigns of his older brother and nephew. In the next chapter, we find the autobiography of Nebuchadnezzar who in the Talmudic is regarded as Nebuchadnezzar the Dwarf. In his youth when as an ill child a vision came to his brother that the sickly boy should be placed under the guardianship of the Goddess Ishtar for his well being.


Growing up in the temple of Ishtar as a priest created great devotion on behalf of Nebuchadnezzar, his devotion which would manufacture itself in his building and restoration of monuments to this goddess, though during his forty plus year reign the king would appease whichever god got the job done. For the most part, the images presented are an average lot with the exceptions of the photographs of the sarcophagus of King Ahiram.


The connection with Chaldean culture to the lost Hittite culture appears clarified as a singular culture within the now classified "Hittite Archives" discovered at Boghazkoi in 1906 which have linked Egyptian annals in time with the tablets.


Having just passed the books halfway point I realize that I am enjoying this read and the volume is becoming hard to put down as was the authors "Oedipus and Akhenaton" published some eighteen years earlier. The reader is taken to the confusion of the Anatolian archaeological record between 1200 to 750BC. The Marriage stelae of year thirty-four of Ramses II is put forward warranting a trip by Nebuchadnezzar to bring his daughter in marriage to Ramses.


'At that time many princes and rulers of foreign countries were gathered in the residence of the pharaoh. But when they heard that the Great King of Hatti was coming, awe seized them. "The great chiefs of every land came; they were bowed down, turning back in fear, when they saw his majesty the chief of Kheta came among them, to seek the favor of King Ramses [II]."


Mr. Velikovsky brings together his characters in a summation of why he believes the kings of Dynasty XIX are one with the kings of Dynasty XXVI. In the epilog, our author attempts to resolve a number of issues which historically separate the two dynastic lines these include the location of the Ramesside capital at Tanis and the XXVI Dynasty capital at Sais believed to be on the Libyan side of the delta. The author has to contend also with the historical lengths of these kings reigns which leave a king like Seti the Great with a reign of over a decade in accepted sources while his Dynasty XXVI counterpart, a reign of over fifty years?


Every once in a while, Mr. Velikovsky puts forward evidence for his cause which I can find a flaw within. The author mentions the hole in the top of the head of the mummy of King Merneptah in the Cairo museum as evidence of a brutal murder of the king. He fails to mention that in the cache where Merneptah was found in  the tomb of Amenhotep II a number of other kingly mummies entombed beside him also had the same hole in their skulls which likely suggested that their mummies were hacked at on the top of their heads with a cutting weapon and peeled downward like a banana by robbers for the mummies accoutrement's.


The question of the validity of the Iron age, Bronze age dating system is put forward and not unreasonable from archaeological finds to suggest those cultures that were rich in iron ore deposits developed iron before the bronze rich societies such as Egypt leading to the passing of the Bronze age.


For myself, Mr.Velikovsky was unable to reduce that seven hundred year gap in time for me to recognize the great King Ramses II as King Necho of Dynasty XXVI. Many points raised by the author were of definite interest but in the end, the argument was not convincing to me and I would leave this book to those who enjoy Biblical archaeology.

Oedipus and Akhnaton
Posted by Timothy Reid at 7:01:00 PM