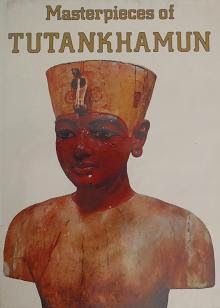 From the start, I really like the books format with a beautiful color photograph of a work of art on the right page while the left is reserved for the authors point beginning with a not frequently seen statue of Amenhotep III and the God Amon. Mr. Silverman writes in a compact description of about two or three paragraphs making his words clear for ages ten to one hundred and ten.


I have always loved the limestone relief of an Amarna princess eating a duck. The unfinished relief may have been a trial piece for the decoration of a wall in the North Palace  at Akhetaton where it was found. A particularly attract image displays two views of the small wood statuette of Tutankhamun rising from a lotus. The back of the head of Tutankhamun clearly shows that the statuette once wore jewelry, a back stud for an earring is still in place.


So many exquisite little chairs all  masterpieces of carpentry created for the royal children and interestingly assembled here by our author. One can only hope that when reviewing a book on this over popularized subject that at least one lesser or unknown object should enhance the publication and thankfully this is accomplished here. I am again faced with the gilded statuette of Tutankhamun on a skiff hunting hippopotami. The statuette or its mate was sadly smashed during the violation of the Cairo museum in 2011.


From here the author focuses on a series of elaborately decorated boxes and cabinets including game boards found in the tomb. These include a lovely ivory and wood chest decorated almost entirely in hieroglyphics in inscriptions and gilded fretwork representing the epitaph of "all life and dominion". The reader is next on to a short series of calcite vessels from Tutankhamun's tomb including my favorite of a waving lion which at the time of discovery was one of the few vessels in the tomb to still contain its contents.


"P.E. Newberry, one of Carter's associates, was able to determine the season in which Tutankhamun was buried on the growing seasons of the plants used in the kings garlands. According to Newberry, the burial occurred from the middle of March to the end of April."


A shrine shaped pendant containing the goddess Nut as a vulture and found in the Anubis shrine is a complex jewel if not entirely satisfactory in design and quality for my tastes. The small recumbent wooden figure of Tutankhamun on a funerary bed was a gift from the kings official Maya who was likely responsible for much of Tutankhamun's burial arrangements as Maya held the title of "Superintendent of building works in the Necropolis".


Two pages of images are devoted to the gorgeous statue of Selkit, one of four goddesses surrounding the canopic shrine. Artistically the statue is one of the great treasures in itself of the tomb furniture.The goddesses arms outstretched with an unconventionally slightly turned head she protects the king's internal organs when she is not overthrowing the serpent Apophis.


It cannot go without mentioning I encountered an error on page150, it should say the coffins weighed over three hundred pounds with the gold coffin weighing over two hundred pounds though it says three and two thousand.


I enjoyed this book it was simple in presentation with Mr. Silverman's words nicely and briefly presenting his points making the book uncomplicated. The error I found with one of the last of Tutankhamun's stuff presented by the author was irrelevant to me. This volume was a good presentation put forward that I would give to a child to enjoy but plenty of adults would also like Masterpieces of Tutankhamun.


"May your ka live;  May you spend millions of years, Oh, you who love Thebes, sitting with your face to the north wind and your eyes beholding happiness."
Tutankhamun's wishing cup