The Complete Valley of The Kings 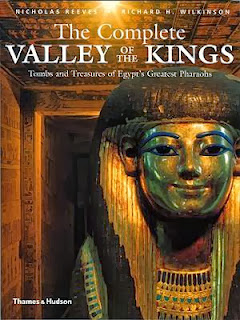 With the introduction, I find myself in a book heavily bestowed with pictures including a map of Egypt accompanied by the chronology of dynastic Egypt. In the first chapter, we find preparations for the royal afterlife presented with the evolution of the royal tomb from the fall of the Old Kingdom and its pyramid burials to Thebes and the Valley of Kings.


The topography and geology of the royal valley play its own part in the development and cutting of the tombs. The authors layout of the development of 18th Dynasty kingly tombs with hidden entrances and bent axis plans in typically the cliff's of the valley or at the base of the cliffs.


The end of the dynasty and the early 19th dynasty tombs still have hidden entrances but now the layout of the tombs have jogged axis off the first pillared hall and are carved in the valley floor. In the final stage, the tombs of 20th Dynasty kings have straight axis after Ramesses III with grand huge entrances at the head of rock spurs from the valley sides.


We are presented here with foundation objects from the tomb of Amenophis III which were deposited during that king's father's reign. The reader is next told of the graffiti and ostraca found around the Theban necropolis' and in the tombs of the kings in the Biban el Molouq.


The many images presented in the chapter are not the usual fair and occupying large parts of most pages.The dilettantes of Egyptology are presented for all their contribution or destruction which includes the destruction done by Champollion, Rosellini and those who pushed over a pillar in the tomb of Seti I so that they could take a piece.


This era leads to the transition of diggers of archaeology to recorders of history though with many hiccups leading up to a National museum and an antiquities service from the efforts of Auguste Mariette. Luckily many of these diggers were relatively unsuccessful in their hunt for tombs.


This meager reward eluded two of the later excavators Victor Loret who's notes are sparse and Howard Carter who's notes were worthy of his position as the discoverer of Tutankhamun's tomb. In an amazing understanding of the valley, Victor Loret and his Reis realized the value of the valley floor and uncovered a further 16 tombs many of the 18th Dynasty in just two years between 1898-1899.


The author delves into Howard Carters early career, his work with Egypt's antiquities service and working for American Financier Theodore Davis who had amazing success in his excavations in the Biban el Molouq. After Davis' many finds and belief that the valley was now exhausted it was up to Howard Carter to convince Lord Carnarvon of the valleys further exploration ending with the unprecedented discovery of the tomb of Tutankhamun.


Chapter III is titled "Tombs of the Kings" beginning with the unidentified tomb of Amenophis I and the possible candidates to be Amenophis' "mansion of eternity". The authors from here go through a chronology of the Thutmoside tombs including contents with an inclusion of Akhenaten's tomb at Amarna and back to the royal valley at Thebes with the enigmatic tomb Kv55.


"the southern side of the chamber lay a decayed wooden coffin adorned with crook and flail and carrying an uninscribed uraeus; the cartouches had been everywhere cut out, and the gold face mask brutally torn away below the eyes. Within, slightly displaced, lay a mummy "crowned" by a gold vulture pectoral".


The various images from photographs to schematics make the read easy to follow and very much suitable for ages ten and up. Each tomb presented in the book is accompanied by numerous pictures of the finds found within including a picture of one of the magic bricks found in Kv55 inscribed for Akhenaten.


Of course chronologically, the next tomb presented is that of the boy king Tutankhamun which thankfully for me is well compacted and not too painfully long and drawn out. The author puts down a good layout of the evolution of the carving of tombs and the decorative program of each succeeding tomb possessed through the three dynasties of the New Kingdom.


Interesting that the authors explain the intrusions to the sepulchers by robbers and usurpers and those find's which went astray in modern times. The book moves on to those tombs of nobles found in the valley including the undecorated tombs which have lacked much appeal by past explorers.


Here we are presented with the animal tombs Kv50-52 on the hillside leading up to the tomb of Amenophis II, KV35. These animals are while a surprising find provoked little interest as did tomb KV60 which contained a couple of mummies, mummified ducks, and rubbish.


The author's point out the various tomb commencements and pits which are more often disregarded in studies of the Valley of Kings. In Chapter IV we move to the decline of the royal necropolis beginning with the robbers and the papyri of tomb robberies that survive.


The discovery of the "kings cache" DB320 is always a fascinating story and in this case superb in the relating of who was in this tomb in regards to the material found. Many of these people such as Wepmose, (a canopic jar), are represented by objects rather than mummies unless they are one of the anonymous mummies found in the cache.


From this point, we are told about the tomb in the Valley of Kings KV35 where another stash of royal mummies was found in 1898 by Victor Loret. The mummies and the dockets found in relation are put forward including coffin and linen dockets as well as the numerous graffiti found in the necropolis.


The authors close out the book with a decipherment of these dockets and their reliability to research to the travels of the royal mummies. In the epilog we are told of the various people and projects that explored and restored the valleys monuments in the later part of the 20th century.


A very interesting last page talks about what the tourist will need in visiting the valley and what should be seen. The book presents solid information but it must be noticed the older copies of this book are already out of date due to the extensive exploration of the Valley of Kings in the last two decades since the book was first published.


When purchasing this book look for the newer updated version. For anyone who is looking for a gift, this book would be perfect for almost anyone. Nicholas Reeves and Richard H.Wilkinson have put forward a worthy and thought inducing read in "The Complete Valley of the Kings".