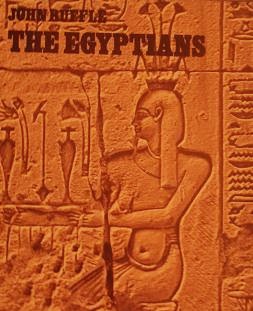 John Ruffle begins his book with an introduction to Egyptology followed by Egypt's geography and ancient chronology.  The author heads into the Pre-Dynastic period which is accompanied by a nice choice of interesting pictures with most being in black and white. Mr. Ruffle's conveyance of Pharaonic history is solid though little is new to me other than some of the pictures.


On into the archaic period, it's few monuments including what the Palermo stone has to say about the period. The author talks about the kings and their tombs at Abydos and Sakkara including  the burial of the apparent sacrifice of the courtiers around the kings of the 1rst dynasty.


From the end of the Archaic period to the beginning of the Old Kingdom the author tells us that little is known of the 2nd and 3rd dynasties but in the 4th dynasty we know more about the line of these megalomaniacal kings again the author tells a really solid story of the Old Kingdom including its kings reigns, their tombs, and their monuments yet still nothing new.


Strangely this chapter contains a color picture of the Valley of Kings and another color picture of the burial chamber of Thutmosis III? The author from here takes us into the Middle Kingdom which again is very well told but it is not until we reach the 17th dynasty and the New kingdom that I find the authors knowledge presents very obscure tidbits of information which I of course love.


Mr. Ruffel tells a good tale of the kings of the 18th dynasty which while interesting it is not labored but flowing well. We are told about the tombs in the various necropolis' at Thebes including Valley of Kings and the tombs of the Nobles.


One cannot mention mortuary temples without mentioning Hatshepsut's grand creation at Deir el Bahari. The author ends the 18th dynasty with the heresy of Akhenaten, its associated art styles and the rulers who cleaned up the mess including Horemheb who erased Akhenaten and his royal successors.


The kings of the 19th and early 20th dynasties attempted to regain the lost empire of Thutmosis III but were unable bringing Egypt's period of the empire to an end with a series of short reigning kings named Ramesses IV through to Ramesses XI.


Mr. Ruffel with considerable speed breezes through the late period  its political and artistic landscapes brought on through periods of occupying dynasties and native dynasties, all identifying themselves with the great periods of Egypt's past. The author makes nice account of the Ptolemaic temples and their decorative schemes.


In the chapter, The Structure of the State, Mr. Ruffle steps into his element with a rundown of the life of the king, his government, his regalia and the seals of authority.  The author does a breakdown of the standards of the society including weights and measures, travel and transportation, the army and the weapons employed.


We are on to the subjects of farming and domestic life which the author delves into the minutia of daily life in Pharaonic times effectively. Minutia which is met with many pictures, mostly in black and white but also color pictures that by the very intense breakdown of the author's tales are frequently exhibits rarely seen.


Mr. Ruffle is on to the cultural life of the ancient Egyptian's beginning with the language and literature and including the scribes equipment throughout Pharaonic history. The author delves into the art and artists and finishes off this chapter with doctors and medicine


The author is on to crafts and industry beginning with metalworking, this includes the find spot of the various metals and ores used by the Egyptian's as well as the smelting of metals and the working of the solid metal into various forms of use and ornament. The industries explored by the author include stoneworking, woodworking, glazing, textiles, ivory carving and the creation of cartonnage, and of course pottery.


Mr. Ruffle finishes off with methods used by the ancient Egyptian architects and workers to build tombs, temples, palaces and common dwellings. The author disseminates the pantheon of Egyptian gods in accordance with the populaces as well as the priestly cast and the various servants of the gods.

Pre-Dynastic to the Ptolemaic and Roman periods including the development of their temples. I particularly liked the drawings of the layouts of a number of temples and that this chapter is loaded with large pictures occupying whole pages, of special interest is a colored image of unfinished reliefs from the tomb of the 18th dynasty King Horemheb from the Valley of Kings.


In the last chapter, Mr. Ruffle explores the world of the dead beginning with funerary beliefs and their accompanying rituals. It is in this last chapter that some of the books best pictures can be found including a large fascinating image of a deposit of objects including several shrines beneath a floor at Sakkara, the image occupying the last page.


John Ruffle's book has done a fine job and is appropriate for anyone 14 to 110 years of age, though all ages will enjoy the pictures. The author never became personal, there were no biographies just elements and adaptations of those elements that made up the lives of the Egyptians.
Posted by Timothy Reid at 4:18:00 PM