Son of the Sun 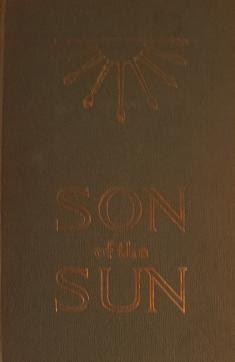 This 1946 book was originally published as "Son of the God" but by the 1956 second edition was renamed. The author was the very controversial Savitri Devi who equated to Hinduism to Nazism with Hitler having been the most recent reincarnation of the Hindu god Vishnu.


The book is on the life and reign of the eighteenth dynasty heretic pharaoh Akhenaton. From the start, I must say that this book has been difficult to get into even though the facts in the book are nicely presented but very outdated. I guess when your a 64-year-old book based on science there is bound to be those gaps of knowledge that came along later.


The author presents the pharaoh Akhenaton as a gentle loving soul of great vision, a true family man glorious, beneficent and sugar coated. This made me a little noxious with the potentially spoiled mentally ill tyrannical dictator being covered in a thick layer of literary butterscotch.


I was not enjoying this but I persevered in hopes it would turn around yet it did not and yes it was clear to me the author was well read though Ms. Devi had drifted off to her own garden of the Aton. There are times that I feel like I am drowning in the gush (adoration) being put forward by the author.


If you are the type who likes to spend Saturday night at home reading the bible than this might be for you but the theological language makes me feel like the author is trying to indoctrinate me into the cult of Aton. The author is obsessed by the vision of the beauty that was Akhenaton, she obviously never saw the colossal statues from the Gem Pa Aton which though powerful and intimidating are not beautiful nor is the guard road which surrounds the site of his capital Akhetaton.


I found the book to be more an interpretation of the religion of the Aton to suit the author's theology, a theology which for me is simplified and made to order. I could not get over my own feelings that the great visionary prophet of the Aton was no friend to the common people but an entitled king who protected his eccentricities by isolating his followers just as cult leaders do today.


The book ends with a chapter on the modern religions in a comparative exercise of theological fantasy ending with the Aton being in possession of the truth according to Ms. Devi. The author was clearly intelligent but all that knowledge did not make for an interesting read rather the king who the author was extolling became lost within the book's religious message.


Ms. Devi's desire to extol her own theology as that of Akhenaton made for a tediously long and tiring read and though I know that something here went over my head I could care less but to give praise to my own lord that I have finished this dull and unrewarding book.
Posted by Timothy Reid at 3:04:00 PM