The Courtiers of Khufu and Khafra 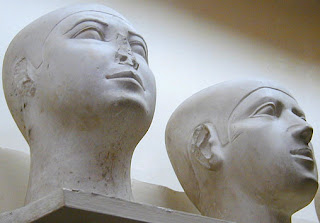 These 37 known Old Kingdom reserve heads as they are known appear to be funerary in nature. Nearly all are carved out of white limestone but at least one is made from Nile mud.


Many appear to be actual portraits while some are too idealized to be portraits of the tomb owners in which all the heads were found. Harvard Egyptologist Dr. George Reisner found most of the heads in tombs from the Fourth Dynasty at Giza relating to courtiers of Pharaoh's Khufu and Khafre. One was found by Jacques de Morgan in 1894 at Saqqara.

One of the heads was undisturbed since the day of burial and was found in the burial chamber next to the sarcophagus. The other heads were found scattered around the tombs and in their shafts discarded by ancient robbers.

One of the heads which came from Giza tomb G4940B and now in the Boston Museum of Fine Art's has a heavily plastered attachment to its face and holes indicating the ears were in another material. Some have suggested the heads were created as molds for funerary masks.

The heads show that the royal court of this dynasty contained members of a number of races. The practice of mummification at this period was not perfected and these heads may be an early form of Kha statue for this nearly three dozen courtiers of the Fourth Dynasty.

The heads are unlike the seradab statues of the same dynasty which feature individual Egyptians in full frontal poses from head to toe with their families. Many of these much more elaborate constructions are for people of much lower status than those represented by the reserve heads who are the prince's and princess's and their partners of the king's court.

The head of Princess Merytyetes bears a distinct dignity her head slightly upturned bearing her royal constitution while her husband's head which is better preserved does not possess her haughty disposition but rather a calming smile. Many like the royal couple just mentioned are wearing skull caps like that worn by the god Ptah while some are bald.

The heads may have led to the development of plaster mummies in the middle of the Old Kingdom with limited success and the Fouth Dynasty convention of reserve heads became obsolete.
Posted by Timothy Reid at 12:49:00 PM