The Cash Register in the Desert 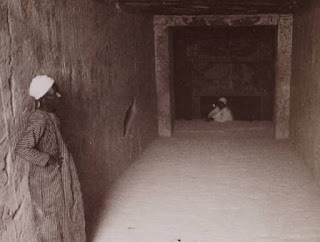 "Even though we had allowed people to take pictures in the valley, people continued to bribe the guards and take cameras into the tombs and use flash."
Dr. Zahi Hawass

I would be curious to know what exactly does a guard make working in the Valley of the Kings? People who make a decent living will respect their jobs and be better employees. That being said the root of the problem is the infection known as tourists who bring their manners, whatever that's worth, and a pocket full of cash.

A thousand U.S. dollars to a guard in the Valley of the Kings will get me what special treatment? Is this a lot of money to a guard in the valley? Is $5000 enough for me to take pictures in the tomb of Seti I or would it be cheaper on an official level?

Three thousand dollars gets me into Nefertari's tomb in the Valley of the Queens but can I take pictures or is that extra? The problem of bribery of the guards is the history of the Valley of the Kings in a nutshell. The pharaohs knew this as did the priests of the necropolis and nothing has changed.

The best that can be expected would be for clear guidelines being handed out in a booklet to every tourist who enters Egypt, proper pay to the employees of the Supreme Council of Antiquities and tourists behaving properly.

Okay, so it's hopeless the rich will still visit the Valley of the Kings while the once in a life timers will be herded into the faux valley where there will be no point to bribe a guard and they will all wear hats that say "Disney" with cobras on the front of them!
Posted by Timothy Reid at 3:12:00 PM

The new photo policy probably pushes up the bribe needed to take photos but as you say I doubt it eliminates it. The problem is the culture of guards taking bribes and that needs to be changed by the authorities.

There probably is a need for a replica site. I don't disagree with that. I just hope it is well done with high quality craftsman ship. I'm just worried it could, as you say, be Disney. There's also a risk that if tourists are encouraged that the replica sites doesn't matter, their behaviour in lesser, but real, other tombs could be poor.

The standard of site guardians and tour group leaders needs to be improved to really solve the problem.