The Egyptian Book of Living and Dying 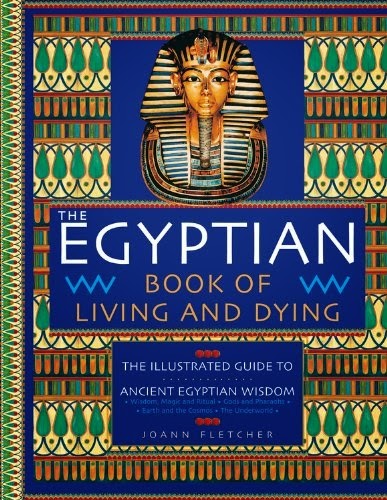 
This lovely and colorful paperback opens with an introduction to the ancient Egyptian religion and practices of their beliefs through complex and often conflicting systems of positive and negative forces combined within one of many deities. These beliefs are founded on the creation theories involving the Ogdoad of Heliopolis, the Ennead of Hermopolis as well as by the Memphite God Ptah.


The reader is introduced to the various deities who produce generations of gods with many forms of animals and temperament to which the god or goddess could be represented, while on the ram-headed God Khnum's potters wheel humanity is created as an afterthought.


The forces these gods and goddess' contributed to the creation of the earth and stars is explored as is the impact of the Nile on the country and its people. "A world of dualities" puts forward primitive aggression to humankind's development of sophisticated thought.


Ms. Fletcher turns to a more in-depth look into the major gods with their liturgy's and loyalties to and from the locals with the observances and feasts practiced by the deities priests and the superstitious populace. The personalities of among others Isis, Horus. Seth and Osiris are explored through the various myths and powers each possessed.


The book is a fairly easy read suitable for readers 10 and up though passing through the halfway point of the book the read possesses little fluency and the subject of Pharaonic religious myth and thought might bore some readers. The author now turns to the king's role in the continuation of the state of Maat and as a bridge between the people and their gods.


Ms. Fletcher is next onto the gods houses including the rituals invoked and the roles of the servants of the gods. Ritual purity was a must in the temples requiring bathing twice a day and twice a night as well as shaved bodies and fresh linens.


The author deals with in passing ancestor worship and heads into the king's ritual responsibilities within the gods houses, usually performed on the king's behalf by the temples priests in the day to day running of the temple. The festival days are covered and seemingly frequent including the Opet festival and local festivals with large processions by land or river to and from their temples.


Various temple documents are touched upon as is the essence of the hieroglyphic script and the symbolism involved in the royal names. The power of magic mixed with theology and dreams are implored to guide or aid the devotee.


In the final chapter, the souls journey to the underworld is guided by an evolving liturgy which over time democratized the path through the underworld from pyramid texts in the royal tombs of the Old Kingdom to the book of the dead found in the coffins of the noble class of the New Kingdom.


The book was a short read and very informative on the subject though I would not say the book was great, it was certainly adequate and reliable as a gift to a young person but I would not give it to an adult!