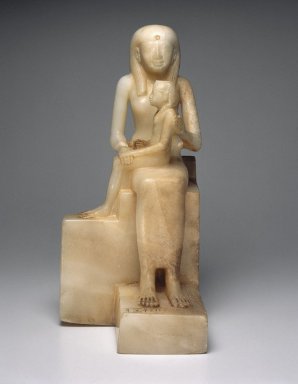 This lovely alabaster statuette from the Brooklyn Museum is just over 39 cm tall and is of Queen Ankhnes-meryre II with her son King Pepy II seated on her lap,(39.119). Pepy II is the second last king of Egypt's Sixth Dynasty and the Old Kingdom with dates for his reign being approximately 2278-2184bc. (1)


The statuette which is without provenance is composed with the larger queen seated on a throne facing forward while King Pepy II is seated on her lap facing right with a base supporting his feet. There is a parallel of the statuette in limestone in Cairo (JE 44866) coincidentally almost the same size though the throne is handled different in that Amarna example.


In the Brooklyn Museum's statuette of Ankhnes-meryre the queens head is disproportionately large for her body and a ureaus of another material appears to have been removed from her forehead while King Pepy is displayed as a small child with the features of an adult in correct proportions. Ankhnes-meryre places her left hand on Pepy's back and with her awkward stiff looking right arm places her right hand on Pepy's knees, the king resting his left hand on his mothers.


The whole composition of the piece is one of royal dignity and affection between a mother and son yet there is an element of detachment between the two where Pepy appears to be falling away from his mother, no tender embrace here.


I could not help but notice that in both Brooklyn's statuette and Cairo's that the child's feet in both compositions is closer to the adult subjects of the sculptures with the child's body leaning outward from the adults but that in Cairo's piece is successfully rendered by the child's head turning to kiss her father, Whereas in Brooklyn the tenderness of the composition is lost by impracticality of the size of Ankhnes-meryre's head and King Pepy stares straight ahead looking more like a doll than an actual person.


To my knowledge there are only two known images of King Pepy II both of which depict him as a child making Brooklyn's statuette the most impressive identified image of this long ruling king. Where in Egyptian history this image of Ankhnes-meryre and Pepy II was created may come with further evidence in the form of a smaller alabaster statuette also in the Brooklyn Museum.


The alabaster statuette of King Pepy I (39.120), Pepy I sits on his throne with the falcon Horus resting on the back of the throne facing the king's left. 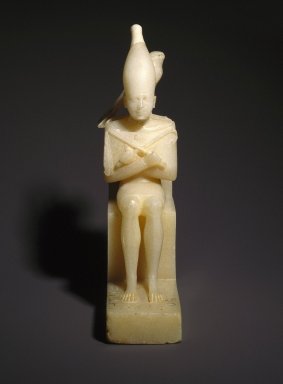 Again the statuette is without a find spot and yes the beauty of the stone is warm much like the Ankhnes-meryre statuette aforementioned and again in very pristine condition with minor damage to King Pepy's crown. Like Ankhnes-meryre, Pepy I's head is too large for the body, the girth of his head being only slightly smaller than the king's waist.


Certainly King Pepi I will win no prizes for his weak shivering legs which appear to be too small for the rest of the figure while the white crown has a wonky appearance and perhaps even the height of the crown appears exaggerated. I am not looking at a great work of art even though it has its charms.


I feel safe in the familiarity that each of the two statuettes have in common that they both come from the same source and perhaps even the same hand though the little questionable details for me make them unlikely to have belonged to the production of the royal workshop.


What type of situation were they created for a temple, a gift from the king to someone at court perhaps for their tomb? If I am right and they were created at the same time that would make them no earlier than Pepy II. I am again reminded of the unfinished limestone piece in Cairo (JE 44866) with its similarity of size and subject though the actors are very different.


Could Brooklyn's Statuettes belong to the Amarna period and have been a program finished or unfinished of a hall of ancestors at Tell el Amarna where the Cairo example was found unfinished?


This is quite a stretch and I am sure that equally good arguments could probably be made for many periods hundred years after the reign of Pepy II? There is still for me that statuette in Cairo (JE 44866) found at Tell el Amarna in that controversial year of 1912. Could that statuette be the model used as a subject for the carving of Brooklyn's Ankhnes-meryre in modern times after 1912?


Further evidence must be found in the cost of the raw block of stone which I would imagine was expensive for such vulgar carving of Ankhness-meryre's head which should have been corrected as there is enough stone in the volume of the head to be reworked to create a more naturalistic appearance but apparently this was not important? 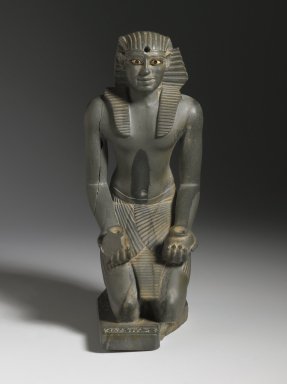 Let's look at a third royal statuette of the Old Kingdom in the Brooklyn Museum, we come to (39.121) a statuette of King Pepi I which bears a grotesque spacey smile. The hands and toes of the king are exaggerated and the right side of the lips goes up while the left side goes down? In statuary of the Old Kingdom the king is usually expressionless, he is not happy, he is not sad but firm.


This king has been perhaps thoughtfully damaged as the base is broken in such a way that it did not cause greater damage to the arms where the breakage to the right arm is a very clean separation with no appearance of shattering that I might expect, perhaps this is a repair and very clean at that? The back of the base is poorly carved and we can see that the king's collar bones are very amateurish.


Three statuettes of Old Kingdom kings all with technical issues leaves me with more questions than answers. I am by no means an expert but I started writing an article on one statuette and now am dealing with three statuettes consecutively numbered in the museum register.


As for the stones the statuettes are carved from the greywhack is most likely from the wadi Hammamat and is perfectly in vogue during the fifth and sixth dynasties as a number of kings from these dynasties had their sarcophagus' carved from it.(2) Alabaster or Travertine is found in a couple of places in Egypt and was also fashionable in the Old Kingdom perhaps most famously represented in the smashed colossal statue of King Menkaure,(09.204) in Boston, found by George Riesner in the kings mortuary temple next to his pyramid at Giza (3).


So the stones for our statuettes are in compliance with royal statuary of the Old Kingdom but based on the flaws in carving I would place them no earlier than the First Intermediate period. It is in the Eighth Dynasty we find rulers at Memphis identifying themselves with the kings of the Sixth Dynasty (4).


Believed to be the last pyramid built at Saqqara the small pyramid is inscribed as belonging to the Eighth Dynasty King Qakare Ibi. The Seventh and Eighth Dynasties make up less than sixty years ruling from ca. 2181-2125 B.C.(5) a date for the sculptures creation somewhere within perhaps even for King Ibi's propaganda scheme at his pyramid though the Turin Canon only attributes two years of rule to the king(6).


The Memphite King Ibi may not have had access to the finest sculptors and on a severely scaled down tax revenues these three sculptures may represent the best he could get. The fine preservation of the Brooklyn statuettes may be the result that the conquering Eleventh Dynasty stripped and buried Ibi's statues to remove his status as a king leaving the delicate statuettes buried and out of harm's way for the last 4000 years.


The true answers to these three statuettes may someday be found in photographs whether in situ or in a modern craftsman's personal catalogue. I have to admit with all this said I am still only fifty fifty whether they are ancient or modern but believe I have located where in ancient Egyptian art history I would consider they are from.