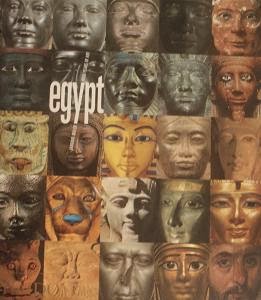 This 376-page book by Jaromir Malek is a substantial weight luckily for the reader not too large so that it can be read with little propping oneself into place. Egypt; 4000 years of Art opens with a nice introduction on the evolution of the arts of ancient Egypt.


The author makes really nice use of clear large pictures on virtually every page starting with a lovely Pre-Dynastic Naqada palette in the Ashmolean museum and Brooklyn's beautiful terracotta"bird woman" dated c.3400 BC. The objects chosen are a pretty standard fair of the most famous with a few harder to find objects such as the sower from the tomb chapel of Itet at Maidum and now in Manchester.


Jaromir Malek has made nice choices of objects though the provenance of his choices is almost completely omitted from the text. The authors choice of the broken off summit of an obelisk belonging to Hatshepsut at Karnak as a demonstration of ancient alteration was particularly interesting.


It is for me the lesser objects that make the connections between the famous and great pieces with Jaromir Malek's descriptions representing not only for the obvious appearance of the objects but the artistic value placed on it in ancient times and modern times. The wooden cosmetic container of a servant carrying a jar in the Liverpool museum an excellent example of a piece altered in modern times by a misguided former owners perception.


The author every once in a while introduces quaint and unusual details including about the leather funerary canopy of Esiemkhebi c.1040 BC. The presentation of the works presented in chronological order has been extremely helpful with Jaromir Malek writing an insightful study on the evolution of Egyptian art.


Egypt: 4000 Years of Art is designed and written in such a way that it is suitable for an enthusiastic 10 year old but sophisticated enough for readers of all ages.
Posted by Timothy Reid at 9:20:00 PM