Tutankhamun: The Golden King and the Great Pharaohs 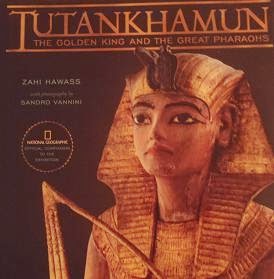 This fairly large volume was written as an accompanying text to the travelling show "Tutankhamun: The Golden King and the great Pharaoh's" the volume has photographs from Sandro Vannini accompanying the text by several authors including a foreword by H. E. Mrs. Suzanne Mubarak and an introduction with a pretty standard outline of Egyptian history by Dr. Zahi Hawass. I did like the inclusion of the image of the possibly fake statue of Thutmosis III.


Various authors then basically repeat what Dr. Hawass explained except in more detail with David O'Connor writing about the Predynastic through the First Intermediate Period. The chronology of the period based on government, architecture, religion and society.


The book moves forward in chapter three with David Silverman's account of the Middle Kingdom and the Second Intermediate Period which includes the changes in burial styles and the evolution of the role of kingship and of his portraiture. In chapter four "The golden age" author Betsy M. Bryan takes on the subject of the New Kingdom including the continued rise of militarism through the three dynasties and the role of women particularly royal women in the foundation of the XVIIIth dynasty.


The role of the increasingly wealthier courtiers and the middle class is examined as is statuary of the New Kingdom and its function. The author then goes on to the development of tombs including those in the Valley of kings, Saqqara and Deir el Medina.


In chapter five Dr. Hawass is back on the discovery of Tutankhamun's tomb with some interesting tidbits but of course, it is a story repeated too much. In chapter six Donald Redford explains the Third Intermediate Period and the rise of the Late Period.


From the division of power between Thebes and Tanis in the Twenty-First Dynasty to the revival of old artistic styles by foreign admiring conquerors of dynasties of the late period. It is at this point we are presented with the first great picture in the book a two-page photograph in the tomb of Mentuemhat in the Assasif necropolis.


Soon the book turns to the objects in the exhibition starting in Gallery one representing pharaohs of the old and Middle Kingdoms, though the choice of the word "Pharaoh" is an inappropriate title for those kings. The Fourth Dynasty calcite statue of King Khafre is not terribly beautiful but an interesting and unusual choice.


Same can be said for the seated statue of the thirteenth dynasty King Sobekhotep it's unusual in its disunity of the composition. Gallery Two contains objects related to the pharaohs of the New Kingdom and later with the remarkable among this gallery of objects is the relief of Horemheb.


In Gallery III the examination is of pharaoh's family with a number of excellent objects including the inner coffin of Kings Wife Meritamun, wife of Amenhotep I. Also interesting is the statue of Nofret opposite Meritamun's coffin, of course the introduction of one of the canopic jars from KV 55 is up to debate on who is represented.


A nice pick is the statue of Benermerut and Princess Meritamun as being unusual and in the style of the famous Senenmut and Princess Neferure statues. So many of the effective choices in this exhibition are from the Karnak cachette and rarely seen.


In Gallery IV "The Pharaoh's Court" The block statue of Hetep is a winner but I must say that I love those block statues. The stelae of Any is a jewel that I cannot say I have seen before it's grim looking figures exalted in Any's glory.


The pharaoh's religion is the basis of gallery V with a stelae of Amenhotep I and his mother Ahmose- Nefertari. I also very much liked the front half a sphinx presenting an offering while the statue of Osiris in the gallery is very fine and stirs a certain sympathy and admiration from the viewer.


The gold of the pharaohs is presented in gallery VI with much of the material chosen for this gallery being very famous choices though the snake-headed amulet of Psusennes I is a little-seen piece. The description presented by Betsy Bryan of the Ahmose I funerary ewer presents a thoughtful direction for the ewer ending up in the burial of Psusennes I. I really liked the bits of jewelry of the kings wife Ahhotep particularly the odd elements of the surviving pieces.


In gallery VII we revisit Tutankhamun with objects from his tomb including a nice ivory senet board and a bunch of amulets and jewelry also very nice is the rather plain cartouche-shaped box and a lovely two-page photo of various shabti's from the boy king's tomb.


The book closes up with a nice roundup by Dr. Hawass of recent discoveries around the various archaeological sites in Egypt with some notes on the exhibition. Tutankhamun: The Golden King and the Great Pharaohs is solid reading material the objects chosen tell a terrific story as do Sandro Vannini's photographs.
Posted by Timothy Reid at 11:18:00 AM