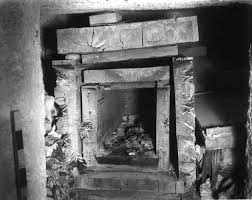 I have long been fascinated by tomb 10a at El Bersha. The tombs occupant a governor named Djehutynakht was buried in what may be the finest surviving coffin of the Middle Kingdom. His wife in the tomb next to him and what might be the largest collection of funerary models ever found in Egypt.

Djehutynahkt and his similarly named wife had probably been at rest for many centuries before robbers entered and ransacked their burial, perhaps in Roman times. These robbers tore the ends off Djehutynakht's two coffins to get at his mummy which they tore apart to steal the jewels scattering the remains around the room in the process. The coffins that supposedly contained his wife were left as a dis-articulated pile of boards. As the robbers left they took some mummy wrappings and set fire to them, but the fire did not catch and quickly went out. The preservation of the remaining contents belongs more than likely to an earthquake shortly after which brought large portions of the honeycombed cliff face down reburying the tomb.

When the Harvard University-Museum of Fine Arts expedition arrived at the site a couple thousand years later in 1915 the tombs remaining contents were in excellent condition. The expedition found artifacts and the mummy fragments but perhaps most important the collection of Middle Kingdom wooden models of varying quality. 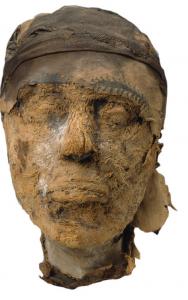 The models convey scenes of workers in daily occupations from brewers and bakers to the very rare brick makers found among Djehutynakht's thirty-nine models with the finest being a procession of offering bearers. Included with the workers were fifty-five model boats for the tomb owners to enjoy in the afterlife. When the finds from the tomb were shipped to America early last century the ship carrying the outer coffin caught fire with luck only minor water damage occurred.

Today for anyone wishing to see Djehutynakht's burial it can now be found in the Boston Museum of Fine Arts. Make sure to check out the links including the animation of the head found in the tomb. Recent studies have shown that the head likely belongs to the Governor