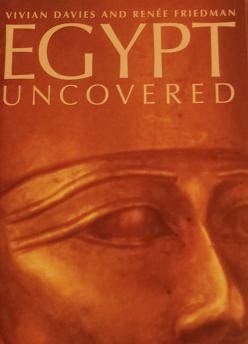 
This attractive book was written to accompany a television program composed with the help of Egyptologists and Archaeologists in the field. The authors present their story from the beginning of known history with man's mastering of the ability to make pottery and stone objects.


The element of kingship historically begins with Menes even though archaeological finds show that earthly kings ruled before Menes with at least one buried at Abydos. The text is accompanied by fine original colored pictures of the modern Egyptian landscape and its archaeological sites.


The reader is now on to the lost capital city of Memphis which moved as the ancient Nile snaked its way to the Mediterranean. Our authors deal with the early construction of the 'Dam of the pagans' at Helwan. This early stone and rubble dam was destroyed by a flood after much of the work was completed.


The authors present the emergence into the Old Kingdom and the age of the 'Resurrection Machine'. The rise of pyramid building occurred quickly that once Djoser's step pyramid had been built at Saqqara less than a century would pass till the building of the King Khufu's great pyramid at Giza.


When building the largest known pyramids on earth a substantial workforce is required. The discovery of the workers town south of the 'Wall of the Crow' in 1988 by Dr. Mark Lehner has led to an understanding of a workforce not made up of slaves but rather Egyptians well taken care of. As the age of pyramids falls into decline the kings burials become more and more modest in construction made up of rubble fill encased in limestone with the invention of religious texts carved into the walls of the burial chambers to lead these kings into heaven.


It is an impressive set of images of pyramids and excavations at the sites occupying the storyline. The book flows well and can be read in a few days at a relaxed pace being suitable to readers ages ten to one hundred. Next, the book is on to the battle with the Hyksos rulers of the Second Intermediate Period and the location of their capital at Avaris in the Nile delta.


The expulsion of the Hyksos from Egypt's delta by the Theban King Ahmose brings on a policy of imperial domination of its neighbors by the following kings of the Eighteenth Dynasty creating the largest empire in Egyptian history. The authors place much emphasis on the role played by the peoples in the area of the Sudan south of Egypt's borders.


The enormous wealth acquired by the state as booty or tribute from these expansionist policies and the violated burials of the pyramid kings brought on the secret burial in 'The Valley of Kings'. Again the deposit of wealth betrayed these emperors as it had to the pyramid kings and five centuries later the great kings of the golden age were devoid of their wealth and being deposited under humble circumstances.


I am next onto the gods both good and evil with the magnificent temples created for a few favorites including the temple of Amun. Empire had been good to Amun with his vast temples construction paid for by these emperors of the Eighteenth through Twentieth Dynasties. Social issues such as birth, myth, magic and the ancestors are covered.


A solitary book of dreams and thousands of copies of the book of the dead only touch the mystic contents of the live and dead populations, particularly among the literate and upper classes. The growth of animal cults became  a means for most classes in society to be heard by the gods they made offerings to including falcons and ibises.


The book ends with a post-mortem on radiography and the art of mummification which was likely occurring as early as 3500 BC. Particularly fascinating is the image of the hand of the Eleventh Dynasty mummy Queen Ashait, the wife of Mentuhotep II. The advent of technology has left the Egyptian mummy as a perfect test subject that today are used to the benefit of the modern population.


With excellent images Egypt Uncovered is backed up by serious technology that causes this book to transcend into many people's interests, creating broad appeal.
Suggested Reading:

Conversations with Mummies
Posted by Timothy Reid at 5:23:00 PM