Cleopatra: From History to Legend 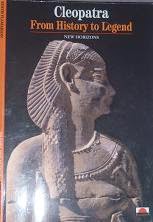 This small 159-page book is filled with numerous colored pictures of Cleopatra and her time including 8 full pages at the start of the book. I must first admit I know only a basic rundown that most people know of this Egyptian queen, Cleopatra VII, and so decided this book was a good place to start, also my copy was bought at the British Museum so it couldn't be that far off.


The book opens with a breakdown of Cleopatra's immediate family including her brother/husband Ptolemy XIII and the city of Alexandria. Certainly, the array of images is very nice with some amazing objects and settings to enhance the authors words. Pages 42-43 are printed with a red background which made them impossible to read without my magnifying glass, perhaps I should take that to mean the book may be suited for a younger reader than myself.


The story is put well forward and the read is enjoyable, though, a single two pages contain often more than one train of thought making the side-script somewhat confusing to the original read. With the 3rd chapter, we find Cleopatra with Julius Caesar and Mark Antony, the royal intrigues, the players of the game and fates which guided the course of history.


The color pictures certainly are what this book is about and though the story of Cleopatra is well known the author has imbued it with great details, then again are those pages of colored background and writing so small I couldn't see.


"There is a harbour...where a bay lulls the roar of the Ionian sea.... Hither came to battle the forces of the world.... On the one side stood a fleet doomed... and Roman javelins shamefully grasped in a woman's hand."


A beautiful 2-page picture of a 17th-century Italian painting of this event recounted above accompanies the incredibly small text of its author Sextus Propertius. In a moment of poor judgement Antony whack's himself because he believes Cleopatra has whacked herself, however, she had not.


So brings us to the final act, the grief of Cleopatra for her lost love and empire unwilling to be marched through Rome bound in silver chains as her captive sister Arsinoe had. Octavian victorious hauls away from the Ptolemaic royal treasury huge quantities of gold and silver, subjugated the Egyptian people but failed to display the prisoner of the hated Egyptian queen through the streets of Rome as Cleopatra was already pushing up daisies.


I am actually surprised at how much I actually know about Cleopatra but this fine read has added a lot more detail to the story. The Roman Emperor Octavian takes over and re-organizes Egypt into a Roman province.


With this the first part of the book ends, the glossy colored pictures replaced by yellow matte paper with black and white images, a section marked as "Documents" occupying the last third of the book. This section included the opinions and sentiments of Cleopatra by an extensive list of historical chroniclers and writers including of course Shakespeare.


This section contained an impressive array of literature which I found incredibly boring and it took me...., well at this the book turned into work. I think what happened for me with this book and the reason I have been avoiding all my books on Cleopatra, the subject does not interest me.


I found no real flaw anywhere and would consider it suitable for young people but a little older for the "Documents" section and not appropriate for those who should not be straining their eyes seeing the tiniest print I ever did almost see!
Posted by Timothy Reid at 5:14:00 PM