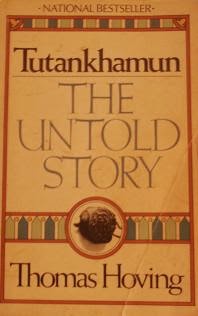 The late Thomas Hoving is a former director of The Metropolitan Museum of Art in New York with this book being his 1978 bestseller. Mr. Hoving opens his book with an introduction into the excavation of the tomb of Tutankhamun and a list of documents used by the author to pull the truth from the romantic story of the boy kings discovery.


From here the author tells us the scanty known biography of Tutankhamun before the discovery of his tomb in November of 1922. We are then introduced to the experienced archaeologist Howard Carter, his foibles and his introduction to Lord Carnarvon, an opulent aristocrat without aim.


A cast of characters of some of the most notable Egyptologists and specialist of the day include Herbert Winlock and Harry Burton of the Metropolitan's excavation team in Egypt. The concession is formed and the scene is set for the history of the Valley of Kings, it's burials and the history of its plunder and exploration.


A break in the search for Tutankhamun's tomb goes almost unnoticed when a pit found contained dozens of pottery jars containing refuse from the boy king's burial which a quick thinking Herbert Winlock secured from its finder for Mr. Winlock's institution the Metropolitan Museum of Art. Only years later would Herbert Winlock open the jars and provide the Carter/Carnarvon expedition with the evidence that the boy king was buried in the valley.


The author goes on to explore the early years of the Carter/Carnarvon concession in the valley with little results that mark the years from 1917-1921 while the criticism from colleagues who believe the valley is empty continues growing until Lord Carnarvon has tired of the fruitless expenditure. There comes a day in November of 1922 where Howard Carter reverted back to the ancient workers huts in the valley that he had uncovered earlier in the expedition but had covered back up and moved on to other spots.


Upon removing the first of these huts came the discovery of a step that would lead to the tomb of the boy king, "The tomb of the golden bird".With the arrival of Lord Carnarvon and his daughter the Carter/Carnarvon team is set to explore a night within the tomb violating the concession agreement by being without an inspector of the Egyptian Antiquities service and entering the antechamber, the treasury and king Tutankhamun's burial chamber all the while Howard Carter is pocketing objects including a gold rosette and an exquisite gold inlaid perfume box and before leaving taking with him the boy kings "wishing cup".


As Lord Carnarvon and Howard Carter begin the search for experts to assist in the extremely delicate operation of the excavation of the tomb they find some of the finest Egyptologist's including linguist James Henry Breasted and the strong co-operation from the Metropolitan Museum of Art whom Lord Carnarvon and Howard Carter have previous cordial relations with and soon the excavator's are swamped by the press with a fateful decision to give the London Times an exclusive which leaves all other media getting their news on the tomb from the Times.


This is unacceptable to the press but even more offensive for the Egyptian populace and press to have to find out from London what is taking place in their country to their ancient king and his house of eternity. With this, the already strong nationalist feeling is confirmed with the suspicion that these Englishmen are potentially looting the tomb of Egypt's ancient boy king.


These feelings appear to be of no or little concern to the Cater/Carnarvon expedition even if they do recognize the issue which is not apparent, all the while managing their new found fame.


Thomas Hoving than goes to showing the building of the relationship between Lord Carnarvon, Howard Carter and The Metropolitan Museum of Art with the acquisition of the treasure of the three princesses' including the deceptive tactics used in its removal from the grasp of the Egyptian Antiquities Service.


The Nationalists begin seeing the gate on the tomb as a symbol of British colonialism keeping the Egyptians out and an old acquaintance Arthur Weigall working on behalf of the Daily Mail pays a visit to the tomb but is refused entrance by Howard Carter who dislikes Weigall. In a series of communication between the two men, Weigall gives Carter good advice as to handling the politics of the find but Carter hostile to Weigall ignores the advice and derides Weigall behind the scenes and in print.


As dignitaries, colleagues and tourists flock to the tomb the excavators find themselves overwhelmed not only by the crowd at the mouth of the tomb but also by the pile of congratulatory letters and requests to be given a tour or by those who would like a sample or souvenir.


Clearing the antechamber counter clockwise the team consolidates strengthens and restores each object as they come to them. Much to the delight of the crowd at the mouth of the tomb are those points where Howard Carter decides an object can leave with each artifact being surrounded by guards while gawkers run along side trying to catch a view.


In the southeast corner of the tomb were a jumble of chariots, the leather having deteriorated causing the mass of chariot parts to become stuck together. Howard Carter and his men decide that the chariots must be removed before the lion and typhon couches can be dealt with, the removal of the couches being a highlight to those waiting in the heat at the mouth of the excavation.


With the antechamber cleared the next decision is on how to open the sealed door on the north wall for the opening of the door a small stage is built against the north wall and a list of who's who is drawn up headed by Elizabeth queen of the Belgian's who realizing that there will be dozens of guests in a hot room 26ft. x 12ft declines the offer preferring to wait for a personal tour.


The queen's visit would be a highlight for the excavators as the politics and press became more complicated with the death of Lord Carnarvon but it is the rise of nationalism that most challenges Howard Carter and endangers the well-being of the boy king's treasure and his concessions share of the Tutankhamun's belongings.


Unfortunately, for Carter and his men, the Egyptian authorities gladly took charge of the tomb forbidding entrance to the excavation team and leaving Carter and his men to stew in their own juices. As Egyptian authorities took over the tomb they found that Carter had left the kings broken granite sarcophagus lid hanging precariously over the sarcophagus and the mummy of Tutankhamun, the lid was carefully lowered and a new lock was placed on the tomb.


With successive changes in the Egyptian government, Howard Carter and his excavation team were eventually allowed back into the tomb but not before Carter and the Carnarvon estate relinquished the right to any objects from the tomb with a side agreement that some duplicates would be made available for the Carter/Carnarvon expedition though this never happened.


As the book comes to a close we find the author giving a rundown of a couple dozen objects in various American museums that may well or are believed to have been smuggled out of the tomb and Egypt with the exception of a number of small objects that ended up in the possession of the Egyptian king who donated them to the Cairo museum shortly before he was exiled, receiving public scorn for being in possession of the artifacts. The book ends with Carter's return to the tomb includes the unwrapping of the king's mummy and completion of the excavation in 1932.


The late Thomas Hoving created in his bestseller a venue for both the reader and the scholar to review a "pocket collection" of  18th Dynasty first class objects picked up somewhere by Howard Carter and Lord Carnarvon sometime before 1923?


The temperamental Howard Carter was no diplomat in times where diplomacy was needed and in his vision of ownership may have removed provenances and degraded his science and his own discovery only to be exposed years later in the sensational "Tutankhamun: The Untold Story".
Posted by Timothy Reid at 10:31:00 AM