Pharaohs and Mortals: Egyptian Art in the Middle Kingdom 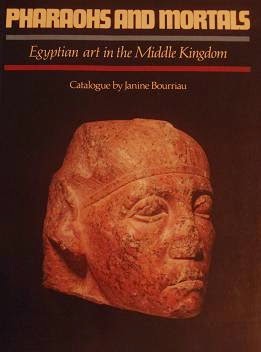 This catalog was put together by Janine Bourriau the former Keeper of Antiquities, Fitzwilliam Museum, Cambridge for the exhibition "Pharaohs and Mortals" running through April to September in 1988. The forward tells us that the objects in the exhibition came from almost every Egyptian collection in the United Kingdom.


Those lenders include the Bolton Museum and Art gallery; the Bristol Art Gallery and Museum; the Museum of Archaeology and Anthropology, Cambridge; the Oriental Museum, University of Durham; the Royal Museum of Scotland, Edinburgh; the Meyers Museum, Eton College; the Burrell Collection, Glasgow; the Liverpool Museum and Department of Egyptology, the University of Liverpool; the British Museum: the Petrie Collection, University College, London; the Manchester Museum; Norwich Castle Museum; the Ashmolean Museum, Oxford; a private collection from East Anglia.


In the introduction to the catalog, Janine Bourriau explains the impetus for the show and thanks a remarkable who's who in Egyptological studies for the contributions made to the author and the catalog. An interesting short chronology of the Middle Kingdom including a comparison of revised dates for the reigns of some of the kings is included as is a concordance of museum and catalog numbers.


The objects in the catalog are a rare collection most of which I have never seen before starting out with the reliefs from the Dendera mastaba tomb of Sennedjsui, dynasty IX c. 2134-2040 BC. The beautiful relief head of Nebhepetre Mentuhotep given by R. G. Gayer-Anderson to the Fitzwilliam EGA. 3143.1943. is a fine surviving piece from some monument of the king.


The stunning fragment catalog number 4 of King Nebhepetre Montuhotep and Kemsit before reunification has the king wearing a crown unique to his reign. The piece was published by Naville and may well have come from the shrine of Kemsit in the mortuary temple of the king at Deir el-Bahari, a gift to the British Museum EA. 1450 from the Egypt Exploration Fund.


Not to say I didn't get any laughs I did have a chuckle when I noticed the next relief of the king was published upside down. If there is criticism to make it would be that almost all the pictures in the catalog are in black and white though four pages are in color.


Flinders Petrie discovered the wonderful "Jubilee relief of Senusret I" face down in the foundations of a Ptolemaic temple to Min at Koptos and it was then passed on to University College 14786 by the Egypt Exploration Fund. The author informs us that the king wearing the red crown of Lower Egypt is running before the God Min.


I really liked catalog number 24, the olive wood (?) staff of Mesehti of Asyut of which it's modern provenance is impressive being purchased by the Reverend William Macgregor and sold with his collection at Sotheby's in 1922. The staff was purchased at that sale by Percy Newberry who had cataloged the collection for the auction. Newberry gave the staff to Eton College, Meyers Museum to accompany their statue said to come from the same tomb that was discovered by robbers in 1893.


The many stelae presented offer an excellent view of the fashions of such funerary inscriptions as well as the fortunate survival of genealogical lines offering bread, beer, oxen, and clothing. The stela varies in quality including one of the late XII Dynasty with its inscription painted on to the limestone but perhaps most interesting is the stelae of a late XIII Dynasty king named Wepwawetemsaf, British Museum EA. 969. The crudely cut limestone slab is from Abydos and is the only known monument of the king it depicts in front of the God Wepwawet.


The catalog next turns to writing and Literature with a series of papyrus documents who's creation in the Middle Kingdom expresses the values held by their authors. In the section on funerary art, the development of styles of burial and the equipment needed for a good time in the afterlife are dealt with. Included are of course the famous wooden models that occupy the first half of the Middle Kingdom and then vanish from the fashion sometime around the reign of Senusret II, to be replaced by the simple all purpose shabti.


The coffins of the period in the catalog include of course the classic rectangular shape with a palace design and eyes for the mummy to look through and most innovative the rise of the anthropoid coffin. The wonderful XIII Dynasty model coffin of Nemtyemweskhet (Liverpool Museum 55.82.114.) was found at Abydos by John Garstang in 1907 inside a model stone sarcophagus, the coffin is said by Garstang to have contained a gilt ushabti.


Among my favorites though must be the mask of the XI Dynasty Steward Thay from tomb 275 at Beni Hasan, Fitzwilliam E.198.1903. also the two XII Dynasty wooden canopic jar lids Fitzwilliam E.26-7.1954. display great character.


From the models of offerings to the funerary servant figurines must be mentioned catalog number 90 the servant girl found in the tomb of Hepikem at Meir, I Eton College, Meyers Museum and dated to the late Old Kingdom. The charming girl carries on her head a box held on by her left hand with a duck in her right while she follows a lovely little gazelle(?). Most of the paint remains giving her much liveliness while her eyes are sympathetic.


A collection of mysterious objects occupies a section on "Art and Magic" including catalog number 100, the magician's wand in the shape of a bronze cobra found entangled in a mass of hair in a tomb under the Ramesseum, Fitzwilliam E.63.1896. The little faience animals of the period have great appeal as the author conveys because of this they rarely have excavation provenances but thankfully here most of the collection presented do even though that is often through maddeningly vague excavation reports coming from an era concerned more with the objects than the context in which they were found.


Another classic of the period are the female figurines found in graves, often clay but in other materials too certainly the ivory figure catalog number 117 from Hu, Fitzwilliam E.16.1899. is a remarkable survival complete with her silver jewelry.


The catalog ends with a section on the decorative arts including pottery, stone vessels, and jewelry. The elegance of the anhydrite duck vase catalog number 143 (Oriental Museum, University of Durham H.2259.) is immediately apparent even in the black and white with as usual the excellent presentation of excavated examples by the author. An index of private names and titles is a useful addition.

Janine Bourriau has created in this catalog and exhibition a monument to the study of the Middle Kingdom objects in the United Kingdom and their relevance to the collection with archaeological studies and comparable specimens in museums around the world used to place them in date. Whether a student in Egyptology or art history this catalog is an excellent read and a must have.